When Hannah lived, she touched lives.  When she died, many mourned and were moved.  Some shared their mourning through song. 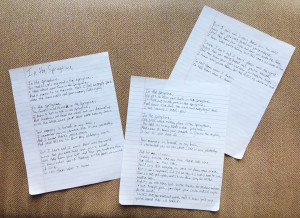 Hannah’s brother Luke wrote this song and performed it at our second Crush Cancer Concert in April 2014 (and subsequently at Hannah’s memorial service at Fairport High School). You can check out his live performance on the Pix & Vids page. Luke’s song was so well received, people donated funds to have him record it in the studio.  Here is that finished version. You may download it for FREE (or make a donation to Hannah’s Fund if you find it of value).

IN THE SPRINGTIME by Luke Metzler

One of Hannah’s schoolmates, Jon Madden, was so moved he composed a choral arrangement, which the Fairport High School Polyphonic Mixed Choir performed at Hannah’s memorial service. Moreover, Jon’s piece has been chosen as one of thirteen finalists (out of over 100) to be performed as part of the Young Composers Competition honors recital at the All-State Winter Conference of the New York State School Music Association in December 2014.  Here is a FREE download of Jon’s song (again, feel free to make a donation).

PEACE I LEAVE WITH YOU by Jon Madden (SoundCloud)

And here is the sheet music that Jon has generously donated for a FREE download from this site: Madden-Jon-Peace-I-Leave-With-You